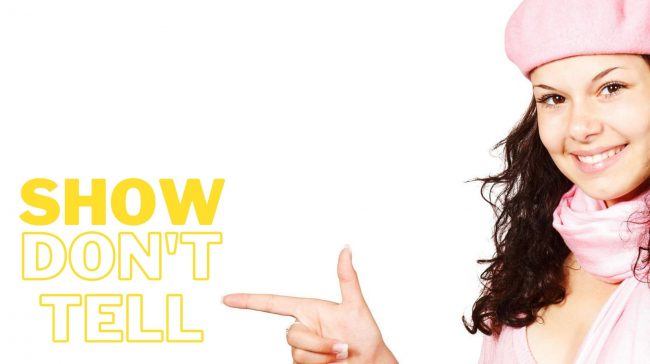 This is where “Show, Don’t Tell” comes into the picture to save your story.

As a writer, “Show, Don’t Tell” is one of the most essential writing concepts you’ll come across because your readers’ interest depends on it.

What’s the Difference between Tell and Show?

Telling is stating a scene to your reader. Showing invokes the mental image of an action or emotion in them.

Simply put, telling a story is reading your students a science experiment on napalm. Showing them is lighting stuff on fire in an open baseball diamond. Get the picture now?

Readers want material that makes them feel like they’re part of the story and that events are unfolding right before their eyes.

How to Show Your Readers?

When your reader loses interest in your story, that’s on you. These seven tips will help you show readers a story.

Dialogues are one of the best tools to create an image in your readers’ minds. It has the effect of having the characters converse in real-time, allows the story to reveal itself organically, and makes your characters come alive.

Contrast this with describing a conversation. The characters fade into the background, and your imagination fails to fill in the details. Here’s an example.

After apologizing to each other, Rob and Sheila felt like they’d never been closer.

“It breaks me seeing you like this. I’m sorry. That memory is forever carved into me.”

“I’m the one to blame. I should have never brought you along knowing you’d be so uncomfortable.”

“I guess we now know where our weaknesses lie, don’t we?”

Notice how the dialogue describes the apology and adds color to how Rob and Sheila grew closer.

The right verbs can turn a pictureless book into a movie.

Verbs are the most dynamic words in your story, and they add life to your sentences; use them prudently. Verbs like slam, crunch, heighten, blow, scorch, and hack add gusto to your writing.

That doesn’t mean you should avoid weak verbs; they have their place. Use stronger verbs in parts of your story you’d like to emphasize.

I quickly made my way home after hearing about the accident. As I ran, the sun’s heat felt strong on my skin. But I needed to be there, so I ran faster.

I charged my way home after hearing about the accident. As I ran, the sun’s heat scorched my skin. But I needed to be there, so I doubled my steps.

With certain parts of your story, you don’t want your readers to simply see what they’re reading. You want them to feel, hear, touch, and taste every word.

Be cautious not to overdo it. You don’t want too much salt in your dish.

It was a bright and sunny day. The park was filled with many cheerful people. It had been so long since I’ve enjoyed such a day.

The brightness of the sun fully embraced this day; the park beamed with smiling faces and resounded with the joyful laughter of children. This day felt like a lover’s sweet kiss after being away from them for months.

4. Specificity Is Your Friend

While we’re on the same boat as my last point, show is much easier when you’re specific with descriptions.

You do want to leave a little bit of work to your readers’ imaginations, but don’t let your words leave them with empty blanks in the scene.

Avoid generic words; use concrete and descriptive language to paint your scene.

The dog was really excited to see its owner. It ran around the house, wagging its tail.

The dog was elated upon seeing its owner after so long. It sprinted around the house, in and out of every room, wagging its tail in a circular motion that you’d think would make it fly.

The story is your world, and the character is your pawn. Don’t do injustice to your character with a simplistic description. Allow your readers to understand characters from their actions.

Treat your character as if they were right in front of you. Think of what they did that day (you were there to see everything). Now, pen that down.

Clare wasn’t depressed. She was just a lazy person. She’d never wanted to go out with her friends.

Clare was a person who’d make a sloth look like Usain Bolt. Her friends would beg her to come out and enjoy the night, but all she wanted to do was watch TV and order takeout.

Not only will over-explaining scenes annoy readers; it will even cause them to lose focus and interest.

Over-explaining should not be confused with colorful words and specific language. If you feel like you’ve made your point about something or someone, stop right there. Move on to the next scene.

Martha was a truly amazing woman for everything she’d done to take care of her family. She was a great woman who knew just what her family needed, and she’d be there for them through thick and thin.

Martha was a truly amazing woman for taking care of her family through thick and thin.

Your readers should feel like they are part of your story. Anyone can tell a story and bore you to tears. But showing your readers is reaching out to them by the hand and telling them: “Hey! I want you here because I know you’re going to love it!”

Engage your readers with dialogues that will make them go back and forth between the characters and deeply understand them. Use strong verbs to make images in their mind come alive. Engage their senses using specific and descriptive language. Reveal your characters by their actions. But be careful not to over-explain, else you might lose your readers’ interest.

So, don’t tell your readers that the stars are bright; show them the vast expanse of the endless sky dazzling with innumerable lights.